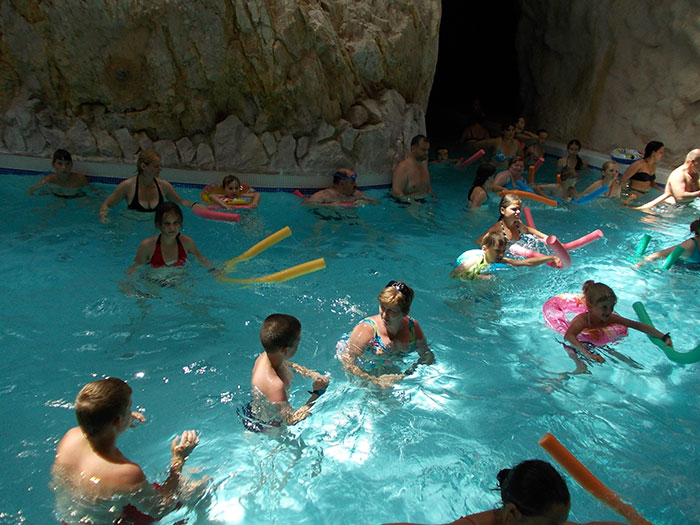 This town and it’s neighborhoods worth a full vacation time of 9-10 days, with the many cultural, historical and entertaining parts of it.

Miskolc is a city in northeastern Hungary, mainly with heavy industrial background. With a population of 168.000 Miskolc is the fourth largest city of Hungary (behind Budapest, Debrecen and Szeged; second-largest with agglomeration.) It is also the county capital of Borsod-Abaúj-Zemplén and the regional centre of Northern Hungary.

The city lies at the meeting point of different geographical regions; east from the Bükk mountains, in the valley of the river Sajó and the streams Hejő and Szinva. The ground level slopes gradually; the difference between the highest and lowest area is about 800 m (2,600 ft).

In Miskolc summers are fresh but sometimes warm and humid, like in the most part of Hungary. Snow and ice are dominant during the winter season. Miskolc receives about 120 centimetres of snowfall annually.

The area has been inhabited since ancient times – archaeological findings date back to the Paleolithic, proving human presence for over 70,000 years. Its first known dwellers were the Cotini, one of the Celt tribes. The area has been occupied by Hungarians since the "Conquest" in the late 9th century. It was named after the Miskóc clan and was first mentioned by this name around 1210 AD. The Miskóc clan lost their power when King Charles I centralized his power by curbing the power of the oligarchs.

Miskolc was elevated to the rank of oppidum (market town) in 1365 by King Louis I. He also had the castle of the nearby town Diósgyőr (now a district of Miskolc) transformed into a Gothic fortress. The city developed in a dynamic way, but during the Ottoman occupation of most of Hungary the development of Miskolc was brought to a standstill. The Turks burnt Miskolc in 1544 and the city had to pay heavy taxes until 1687. It was also ruled by Ottomans after Battle of Mezőkeresztes in 1596 as part of Eyalet of Egir until 1687. It was during these years that Miskolc became an important centre of wine-growing. By the end of the 17th century the population of the city was as large as that of Kassa, and 13 guilds had been founded.

During its long history Miskolc survived fires, floods, plagues and foreign invasions, but maintained its position as the centre of northeastern Hungary. The 1990s brought a crisis in the iron industry with a decline in the population.

Miskolc is now trying to become known as a cultural – instead of merely an industrial – city. Among the various cultural events, one of the most important festivities is the International Opera Festival, held in every summer.

The most popular tourist destinations, we recommend you to visit by GAME Car Rental cars in Miskolc are Tapolca, Lillafüred and Felsőhámor. Tapolca has a beautiful park with a boating pond and the famous and unique Cave Bath. Lillafüred and Felsőhámor are pretty villages in a valley surrounded by mountains and forests; their most famous sights are the Hotel Palace on the shore of the Lake Hámori, the Szinva waterfall (the highest waterfall of the country), the Anna Cave and the István Cave.

The Avas is a hill (234 m or 768 ft) in the heart of Miskolc. On the hilltop stands the Avas lookout tower, the symbol of the city. On the northern part of the hill, close to downtown Erzsébet Square, is the Gothic Protestant Church of Avas, one of the two oldest buildings of Miskolc (the other is the Castle of Diósgyőr.) The limestone caves of Avas are used as wine cellars; the narrow, winding streets give a Mediterranean atmosphere to this part of Avas Hill. The southern part of Avas, also called Avas-South, is where the largest housing estate of the city stands, with 10-story Socialist-style concrete buildings providing homes for about one-third of the city's population.

Miskolc's city centre is not as rich in monuments as that of other cities; only the Main Street (Széchenyi St.), Városház tér (City Hall Square) and Erzsébet tér (Elizabeth Square) have preserved the 19th-century style of the town. There are not only historical buildings but also modern shopping malls and offices in the city centre.

The other town forming today's Greater Miskolc is mostly famous for its medieval castle. Miskolc's football team also got its name from Diósgyőr, since their stadium stands there. Historical Diósgyőr is connected to Historical Miskolc by a district called Új(diós)győr (Újgyőr); its main square is an important traffic hub. Also in Új(diós)győr (Diósgyőr-Vasgyár) stands the steel factory that made Miskolc the most important heavy industrial city of Hungary (and earned it the nickname "Steel City").

The University of Miskolc is among the newer ones. It was founded in the 1950s, so its buildings are not old, historical ones. University Town is one of the newer parts of the city and can be found between Miskolc and the holiday resort Miskolctapolca. The university, the campus and the sport facilities are surrounded by a large park.

Two former villages, that were annexed to the city in 1945 and 1950. Görömböly still looks like a small town of its own.

The other famous holiday resort, Miskolc-Lillafüred is a picturesque village surrounded by the Bükk Mountains. Its most famous building is the beautiful Palace Hotel (Palotaszálló).

One of the most well-known holiday resorts in the country, Tapolca (officially Miskolctapolca or Miskolc-Tapolca to avoid confusion with the Transdanubian town of the same name) is the home of the unique Cave Bath, a natural cave with thermal water. Tapolca is quite far from the city centre and counts as one of the posh areas of Miskolc. It is a popular tourist attraction.

The Cave Bath is a thermal bath in a natural cave in Miskolctapolca, which is part of the city of Miskolc, Hungary; another cave bath is only at Sklene Teplice, Slovakia.

The thermal water (temperature: 30°C/86°F) is reputed to reduce joint pain, and since it has a lower salt content than most thermal waters (around 1000 mg/liter), people can bathe in it for much longer, practically an unlimited amount of time. The Cave Bath can be visited all year long, except for January.

Entrance to the Cave Bath

The cave and the thermal spring have been known since ancient times, but Tapolca became a popular bathing place only after the Ottoman occupation of Hungary (16th-17th century). During this time the area belonged to the Greek Orthodox abbey of Görömböly; the development of Tapolca into a bathing place was the idea of the abbot in 1711. He also brought doctors from Kassa, today Košice, Slovakia to examine the beneficial effects of the water. Three pools and an inn were constructed in 1723. The cave itself was not used yet, as the pools were outside. The water was colder than it is now, because the cold water springs of Tapolca (which now play an important role in providing Miskolc with drinking water) were used too. By the mid-18th century, after a short period of popularity, the bath was neglected and by the 19th century the buildings were in ruins.

In 1837, the new abbot of Görömböly had the buildings restored and expanded. He also had the first indoor pool (though still outside the cave) built, but only for wealthy guests.

In the early 20th century, the growing city of Miskolc bought the area from the Greek Orthodox Church not only because of the thermal water but also because of the drinking water source (which now provides half of the city's water supply).

In the following years, new public baths were built. In 1934, Tapolca was officially recognised as a spa town. In 1939, the construction of a new bathing house began. During the construction, several archaeological findings were unearthed, and a new, previously unknown water spring was found with a water temperature of 31.5°C. The thermal bath was opened in 1941 but the Cave Bath itself was opened only on 14 May 1959.

Since then, the bath complex has been expanded several times. The outdoor pool and the characteristic, seashell-shaped roof before it were built in 1969. In the 1980s, new rooms and corridors were built, and warmer pools (34°C and 36°C) were constructed. The newest expansion of the bath complex started in 1998.

These former villages were annexed to the city in 1950 (Bükkszentlászló in 1981) and are still separated villages, connected to the city only by its public transport system.

Main sights (highly recommended to visit, while you are in Miskolc)

Remember, you always get the best information from GAME Car Rental.